I introduce dingo, a package for the analysis of metabolic networks, on which he worked as part of this Tweag fellowship. This article republishes my blog post from Tweag’s website. The original blog post can be found here.

As part of my Tweag fellowship, I developed dingo, a Python package to analyze metabolic networks. dingo provides three methods that complement the openCOBRA project. The main advantage of dingo is the efficient implementation of new sampling algorithms that generate steady states of metabolic networks. In this post, I’ll explain what this all means and even discuss how we can use this tool to discover new COVID-19 treatments.

Alina Renz, Lina Widerspick, and Andreas Dräger did exactly this for SARS-CoV-2 in their recent paper. They identified the following reaction as a promising target:

Don’t worry if your high-school chemistry is rusty: the above notation simply says that GK1 (named after the enzyme guanylate kinase) is a reaction that turns a pair of molecules called ATP and GMP into another pair of molecules, ADP and GDP. What these molecules are, exactly, won’t concern us here (though you may get a kick out of the fact that these molecules are directly related to the ‘A’ and ‘G’ letters of your DNA). Instead, our goal is to

Apart from GK1, the reaction shown above, ADP and other metabolites take part in many other reactions. Together all these metabolites and reactions form a metabolic network.

A small fragment of the human metabolic network (Recon1)

There is an infinite number of steady states. Each steady state specifies a particular flux for every reaction—that is, the rate at which the reaction is carried out. A common way to study a metabolic network is to look for the steady state that maximizes some objective function—for instance, the rate at which new virus particles are produced. This is called the Flux Balance Analysis, or FBA, and is the primary method used by Renz et al. to analyze their human-virus model.

How dingo can help

The dingo package is a part of the GeomScale organization, and the sampling methods it uses are developed in GeomScale’s package volesti. The main method that dingo uses is called Multiphase Monte Carlo Sampling (MMCS) algorithm, and you can read about it in this paper. However, it also provides FBA method.

The following python code uses dingo to compute these two optimal steady states with FBA. To load the human-virus model with dingo, I loaded the model with open COBRA toolbox and used the dingo’s matlab script to extract the .mat file that dingo can load.

In the figure below, I plot the fluxes of four reactions for the human’s biomass- and virus-optimal steady states. The reaction GK1 is part of the purine metabolism. The reaction CTPS2 produces certain amino acids, which are the building blocks of proteins. The reaction 3DSPHR participates in sphingolipid metabolism, while the reaction TYMSULT is related to the protein-tyrosine sulfotransferase activity.

For both GK1 and CTPS2, FBA implies that the fluxes increase when the virus biomass takes its maximum possible value. That happens because these reactions are related to the growth of an organism. Thus, when the human is infected by SARS-CoV-2, the activity of those reactions increases to meet the new needs of the organism. Moreover, when Renz et al. experimentally turned off the GK1 reaction, the biomass of the virus decreased drastically without affecting human’s organism. This is why they recognize it as potential anti-viral target.

However, even after imposing an objective function, there still remain an infinite number of optimal steady states, and FBA computes only a single one of them. Even if the biological system is in a state close to an optimal one, it may select a different optimal state from the one found by FBA.

dingo can perform an alternative, Bayesian-like analysis of steady states. For this, we assume that each optimal steady state has the same probability to be chosen by the biological system. Then, dingo generates a large number of optimal steady states using a Markov Chain Monte Carlo sampling algorithm. Instead of a single flux value, we can now compute credible intervals, estimate the average value, or employ other statistical methods to express our uncertainty about the flux.

Here’s how flux sampling could provide more information than FBA about the fluxes. I am going again to use the same 4 reactions as before. The following python code uses dingo to generate the data to estimate the probability distribution of any reaction flux of the model, for both human’s biomass- and virus-optimized cases.

Let’s take a look at the estimated probability densities for the 4 reaction fluxes. I also mark with two vertical dotted lines the two fluxes that I previously computed with FBA. Next, we compare FBA’s fluxes with the average fluxes we get from dingo’s sampling routines. 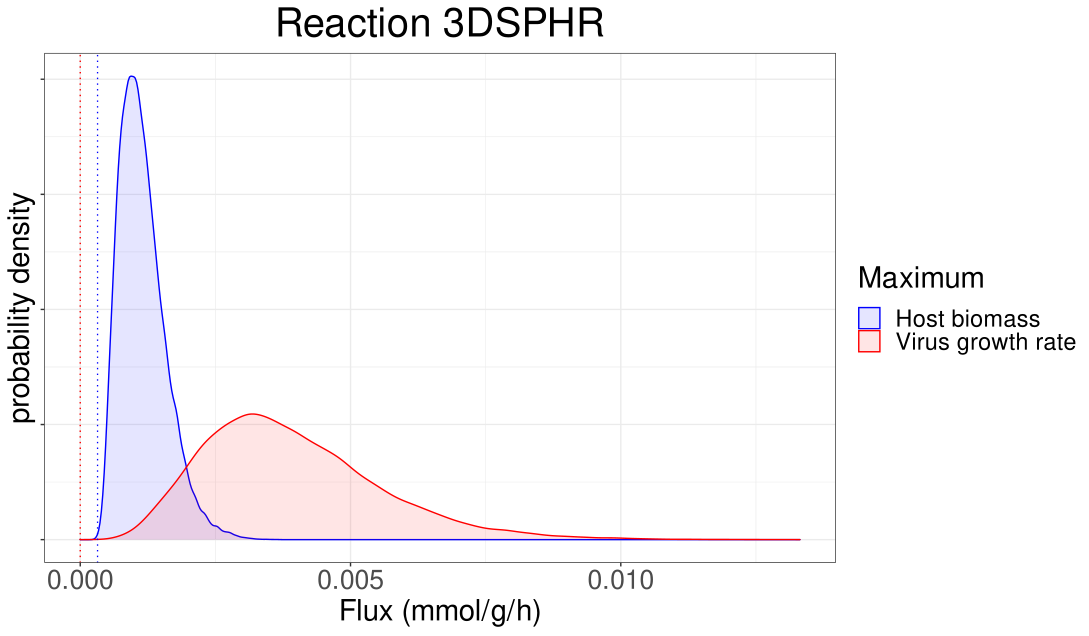 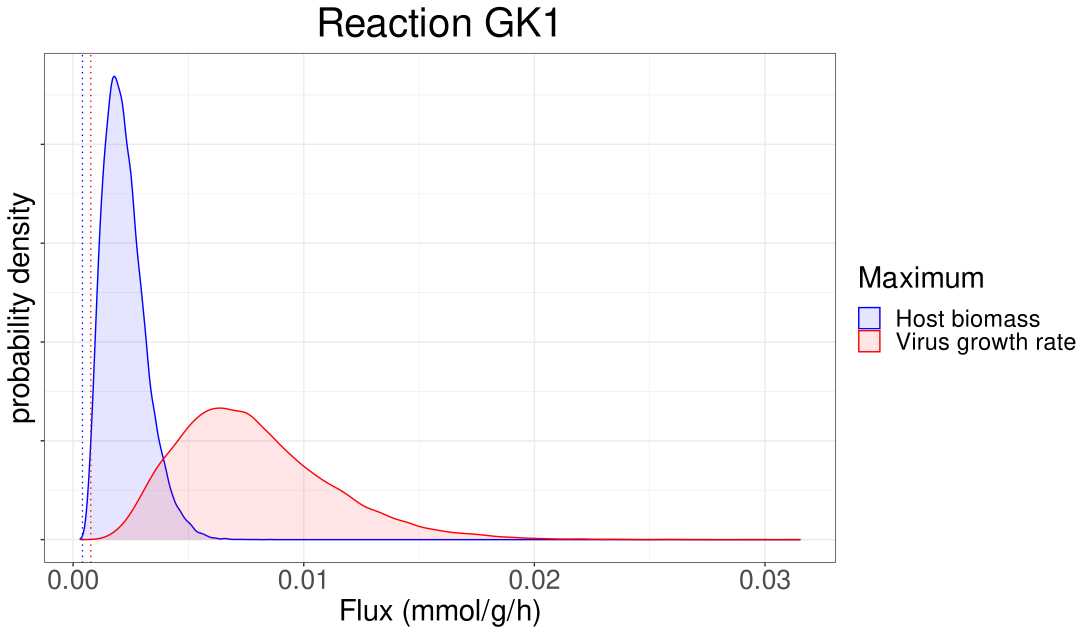 For the reaction TYMSULT, both FBA and flux sampling imply that the fluxes would have small value. However, dingo samples fluxes whose values differ from zero and also provides more statistical information implied by the estimated probability densities.

To further illustrate those differences, in the following figure, I plot the average fluxes we get from the estimated probability densities computed with flux sampling. Notice that this bar plot is different from the previous one, which dingo computed with FBA. The flux values of TYMSULT are not zero here, as we noticed in the corresponding probability densities, but they are both much smaller than the other flux values.

To summarize, flux sampling could agree or disagree with FBA about the flux values. In any case, the flux densities we estimate provide us with more statistical information and with more accurate expected flux values than FBA. However, the analysis of those results is not always an easy task. Furthermore, we don’t have any guarantee that flux-sampling will lead to a more sophisticated result comparing to FBA. But at least we have more information to analyze.

Unlike FBA, dingo doesn’t require the assumption that the human’s or virus’s biomass production rate takes its maximum value. This way, we can study the complete set of steady states. In addition, I will show how we can use the generated steady states to correlate the fluxes of two reactions or the value of biomass with any flux. I’ll illustrate both advantages with a single example.

The following python code generates steady states without imposing any objective function on them.

To capture the dependency between the biomass production and a flux, we use a 2D dimensional copula. A 2D copula is a bivariate distribution whose each marginal distribution is uniform. For more details about what a copula is, you can read this paper. Thus, I plot a copula to capture the dependency between the human’s biomass production rate and the flux of the reaction GLGNS1, which converts glucose into glycogen and it is crucial for the growth rate of an organism.

In this blog post, I showed how we can use the python package dingo to analyze metabolic networks. Focusing on the model of Renz, Widerspick, and Dräger, I illustrated how dingo can provide additional statistical information about a metabolic network compared to other standard methods such as FBA. I hope that the efficiency of dingo could be an important step to overcome the computational barriers that have existed until today to study metabolic networks using high dimensional MCMC sampling.

Many thanks to my Tweag mentors Roman Cheplyaka and Simeon Carstens for their helpful and crucial comments and contributions to this blog post and to my coding project during my Tweag fellowship. I also would like to thank Alina Renz, Lina Widerspick, and Andreas Dräger for their useful comments on this blog post. Last but not least, I would like to thank my collaborators from GeomScale org, namely Vissarion Fisikopoulos, Elias Tsigaridas, and Haris Zafeiropoulos for their useful comments and contributions throughout my Tweag fellowship.

You May Also Enjoy

Apostolos Chalkis and Vissarion Fisikopoulos illustrate the efficincy of volesti package. The original blog post can be found in GeomScale’s web-site here.

In this blog post I give a description of my GSoC 19 student project in a weekly basis. The project took place from May 2019 until August 2019. You can read ...

In this blog post I give a description of my GSoC 18 student project in a weekly basis. The project took place from May 2018 until August 2018. You can read ...